Joseph Anthony Connor FRSA is a leading advocate of the act of creating art in open spaces using mobile digital devices, and is recognised as a leader in the 21st century landscape art movement (Outdoor Mobile Digital Art). In his words ( taken from 'Walking Paint') this is what it is like to paint outside during the year

"To be outside and paint.
Is like being born.
You do not remember the moment,
As you are in it.
What you render brings back elements of these moments
They are anchors
To the moments sights, sounds, smells and feelings

On calm warm spring mornings.
As you move your colour on the screen
Post sunset dew triggers a mouldy fragrance from grass
What was grey, turns pink
And the feet of a thousand children
Beat colours into the sky
At a speed too swift to capture

On summer days
Birds sing to you as you watch light.
Slowly paint the hillside
And you can slow your rendering down
To the speed of a blackbirds song

On a winter's morning
Chilled by a night's sleep within a blustery sky
You awake to a gale
A slave to render the light amongst a swirling dragon mist
Transfixed as it devours the mountain on which you stand.'"

Joseph trained as a draughtsman, studied at the University of Manchester and is a Fellow of the Royal Society of Arts. He achieved critical success in 2013 and 2017 via the Lumen Prize (as a Top100 Global Artist). As a digital artist he has exhibited internationally and most recently in London's Southbank Centre. He remains the only artists to have had work presented as a State Gift by the UK government to 61 world leaders. This event was covered by the BBC & ITV but was best summarised by the London Evening Standard below: 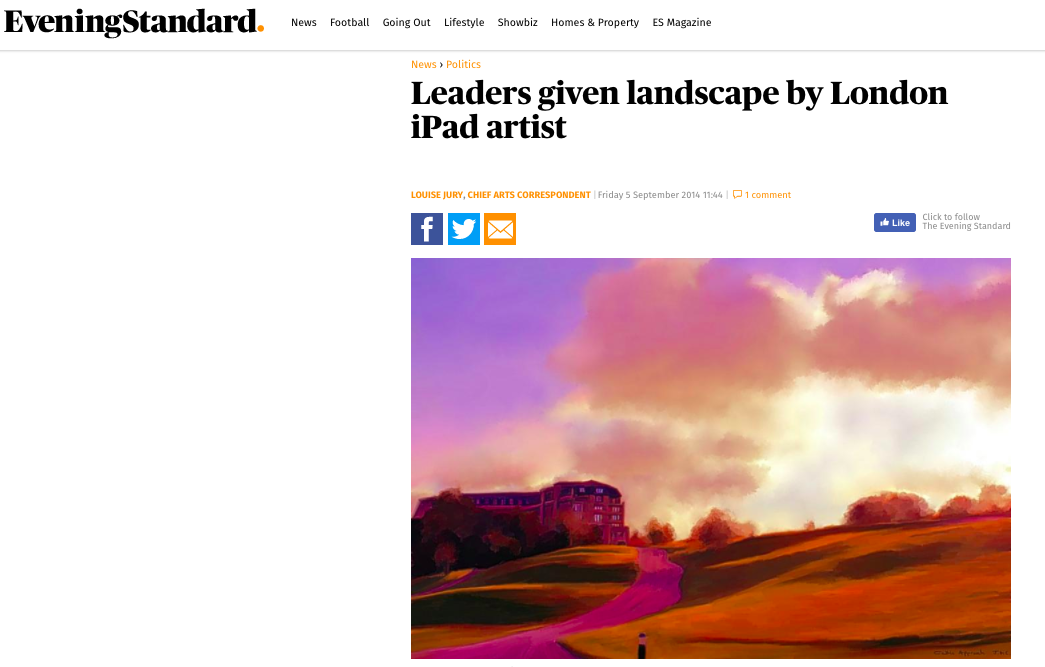 ​Bring on the Screen Strokers!
April 2020

For me, paintings purpose is not the creation of art. Let me explain. I understand why people are driven to create art. Making items that please is a joyous experience. For me the purpose of painting is simply a way of creating a better memory of a place. My art is just a popular by-product.

Prior to the existence of painting apps I would struggle to set up, mix paint, and waste water in time to capture light on a landscape, and photography never really works for me.  In addition I seldom felt comfort knowing that what was created on a mountain would come back home in the manner that it was prepared.

My world first changed in 2011 on hearing of applications were available on iPads to draw. By accident, a joyous one, I discovered the Artrage App. In one application there it was, everything that I used to previously create with.

Wondrous things began to happen.  I taught my daughter, then aged of 3, how to paint without the fear of remnants of our endeavours being distributed around the house. Whilst waiting for my time to go back to the mountains. I would paint the journeys of fellow hill walkers. Then post them to each walker via Twitter. The act of giving brought joy to each party. #SeenSend and #WalkingPaint were born: 'show me what you have seen and I will send you what you inspire'. I virtually walked in the shoes of many people in 2011.

Because I practiced more frequently, I got better, and because I shared the end result via Twitter I got more confident. I recommend this practice to audiences at events at which I am asked to paint. ‘If you save it, send it’. Let your joy of a place embodied in digital brush strokes be free: effortless giving.

Also, my style of painting changed. Previously I wanted to capture every detail. Because of screen sizes and glare this was no longer possible. This meant that I would relax into the movement of light on a mountain, and less into the minutiae of nature. I began to become one with the transitions in weather, seasons , temperatures, sounds, smells and soul of place. Places would absorbed me. In these moments I feel less like a person and more like like some sort of super human that can slow the movement of light and time.

I had always been deeply attracted to the rapid change in light arising in the UK Lake District and Welsh Valleys. New vistas and scenes pop up with mercurial speed. Hitherto I would struggle to capture those moments. But now thanks to digital paint I was able to render the moment quickly in a manner that gave me great satisfaction. Joy arose as I had the opportunity to look up at the subject for longer.  My hand became the slave to my eyes, ears and nose, not the other way around which is what it feels like when I paint indoors.

I was transformed from being a walker, into a walker with a painting problem. Previously my fellow walkers would put up with extended food brakes during which I would get lost in a landscape and sketch. Now I had the ability to stop and render more frequently. I became a less useful companion for serious hill walking friends. So I became what I am now a man who can be found outdoors, often alone, stroking a screen in field or atop a mountain.

Nowadays it is common to see people outdoors on a phone, usually on social media I imagine. Back in 2011 it was an unusual sight, and I would attract attention, and often had to explain what I was doing. Now screen strokers are everywhere. For this I am thankful. I blend in. Now one can concentrate on the sight, sounds, temperature and smells that rise, fall and change in an undisturbed creative flow.

So for all people who want to remind themselves of the joy of sketching. and being outside. Take your phone for a walk, and have a go via a painting app.  Nobody will judge you. Or distract you from the joy of looking for longer.

Bring on the screen strokers!
Tweets by jacmobileart